To get the data for this analysis I used a website called Racenet which had information on all Australian races since 2008. I wrote a python script to scrape all the data from every race on the website as well as data on every horse. After scraping, cleaning and creating new variables I was left with a dataset with 1.5 million rows and 25 columns where every row corresponded to an instance of a specific horse running in a specific race. There were three types of variables:

Next I wanted to quantify the concept of “form”. Knowing the age, gender and weight of a horse is useful when trying to predict the outcome of a race, but one of the most important factors is previous results. This is difficult for two main reasons:

To capture form I wrote an algorithm with Luke Tsekouras which was loosely based on Google’s Page Rank algorithm (this is similar to the algorithm used in my NRL Form Visualisation). The steps in the process were:

For this task I used a simple feed-forward neural network with 2 hidden layers. The model properties were:

I simulated running this model with a test set of ~800 races which is the equivalent of using this betting model in the real world for about 2 years (examples shown below). The simulations showed that on average, after 2 years you would make a profit of 37%. Unfortunately there was a high level of variance between simulations and after 2 years some models did end in a loss, so even though on average you make a profit, you would probably need to use this strategy for decades to be confident of making a profit. 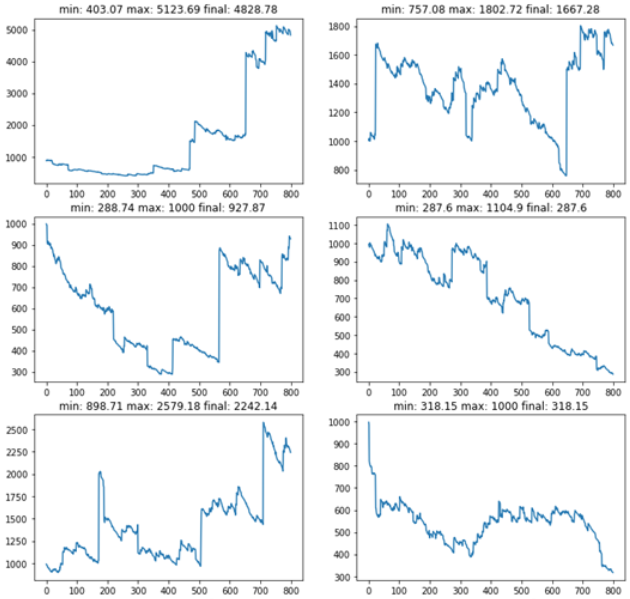