This article was originally published on Towards Data Science.

'Tis the season to be watching lots of cricket and once again I have obliged. Yes, every summer I plonk myself down on the lounge and observe approximately seven million hours of my favourite sport, but last year I decided to spend some of the time between overs working on a predictive model. Modelling sports is a passion of mine and was actually the gateway drug that initially got me interested in data science. In the past, I have trained models to predict the outcomes of rugby matches, tennis matches and horse races and even won a lucrative first prize in a data science competition to predict the Australian Open.

My primary goal with this project was not to build the most accurate algorithm ever (nice as that would be) but rather to experiment with a probabilistic, bottom-up approach to modelling. Instead of trying to predict match results based on historical data, I trained a neural-network model to predict the outcome of individual balls and then built a custom Monte Carlo simulation engine to generate tens of thousands of possible games.

Unfortunately, I can't share the data source for this project since I leveraged my personal sports database but this kind of data is quite easy to find publicly. Below are some samples from my starting tables to give an idea of the kind of data I was working with.

For this project, I decided to use a bottom-up approach by training a model to predict the outcome of each ball bowled (rather than the overall match result). My reasons were as follows:

At the heart of this project is my ball prediction model which was trained on the ~700k balls in my dataset. This was a multi-class classification problem and for simplicity, I limited the classes (possible outcomes of a ball) to 8 options (0, 1, 2, 3, 4, 6, Wicket, Wide). The inputs to the model were: 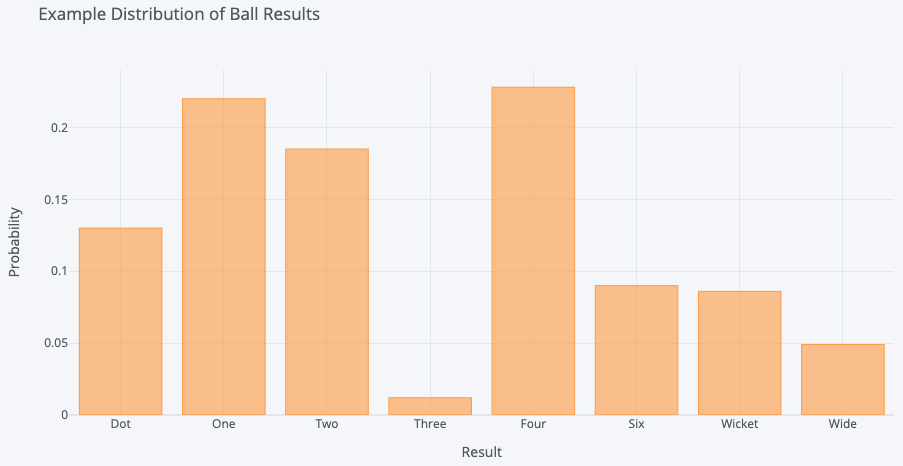 I won't go into too much detail about model choice and hyperparameter optimisation here since it is not the focus of this article but I have included the Keras summary of my final model below. In short, I trained a feed-forward neural network model with 2 dense layers of 50 nodes with a ReLU activation function on each. I also applied Batch Normalisation and Dropout.

The next step was to build a simulation engine in Python that could be used to generate full matches using the ball prediction model. At a high level the steps to generate a simulation are:

This is not a tutorial but I have included some of my code below to illustrate the mechanics of this simulation engine.

I also included functionality to run the simulation engine in "verbose" mode which outputs a running commentary of a match's progress. An example of running a single simulation in this mode is shown below.

To make predictions, we use the simulation engine described above. Each simulation represents a single possible outcome but using Monte Carlo methods we are able to estimate the distribution of match results by simulating many times. To predict the probability of an outcome, simply count up all the simulations where that outcome occurred and divide by the total number of simulations. For example, if you simulated a match between the Sydney Sixers and the Melbourne Stars 1000 times:

So after all that, is my model actually any good? To try to answer this question I took 1126 historical matches from my dataset and simulated them 500 times each. Ideally you would simulate each match many more times than this but it was computationally impractical for this project. Due to the bottom-up nature of my model, there are actually numerous modes of appraisal, some of which I outline below.

The first common-sense test was to see if the predicted matches looked realistic and fortunately they did. Remember that the matches are simulated using the Ball Prediction model and therefore we had no guarantees that the outputs would be sensible. For example, if the Ball Prediction model was performing poorly we might see batting teams getting bowled out too frequently or teams racking up astronomical scores.

Having watched so much cricket in real life, I was able to quickly see that my simulations were reminiscent of real games, which was reassuring if not overly scientific. To further support my intuition, I sampled some real matches and simulations and compared the distributions of numerous match outcomes. In the examples below you can clearly see that the distributions for these outcomes are very similar for the real and simulated matches.

The next way I assessed my model was by predicting the winner of matches. As described earlier, to get the predicted probability of Team A winning Match X, simply add up all the simulations where Team A was the winner and divide by the total number of simulations. Across the simulated matches, my model was able to predict the winner with 55.6% accuracy and with a log loss of 0.687.

While I was initially quite underwhelmed by these results, I was buoyed by further analysis using historical betting odds from Bet365. When I compared my model predictions to the predictions implied by Bet365's odds I found that my model actually out-performed them. Bet365 picked the winner with lower accuracy (54.2%) and with a higher log loss (0.695). To put this in perspective, a benchmark model that predicts 0.5 probability for both teams for every match corresponds to a log loss of 0.693 meaning that the Bet365 odds are worse than a model with no information!

Now the take away here is not that my model is amazing at predicting T20 match results, but rather that T20 match results are inherently difficult to predict. I do suspect that I would get an uplift in model performance by simulating more than 500 times per match but I will need to test this hypothesis in future.

Finally, I tried predicting some other features of matches. Again I ran into the intrinsic unpredictability of the sport but I have included a few results below.

To predict the first innings score of each match I used the mean first innings score in all the simulations where the correct team batted first. In the scatter plot below we can see that there is a relationship between the predicted and actual scores but it is pretty noisy. The correlation here is 0.305 with a p-value of 1.18e-25 suggesting that the simulations are doing a reasonable job of modelling this feature but there are just too many unknowns to do it accurately. Further evidence for this is the average standard deviation for first innings score across all the simulated matches which was quite high at 28.6. 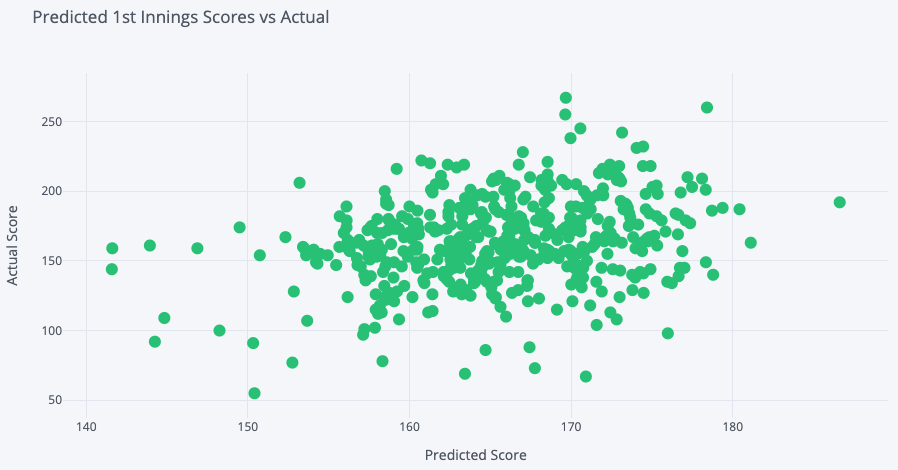 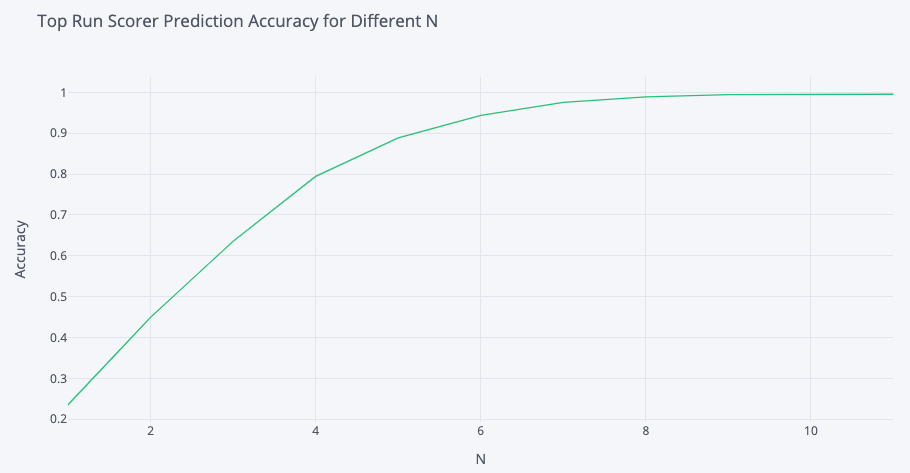 I used the same methodology here as for the Top Run Scorer prediction above but this time I was trying to pick the top wicket-taker for each team. The plot below shows that my top pick was correct in ~35% of matches and that the true top wicket-taker was in my top 3 predictions ~75% of the time. 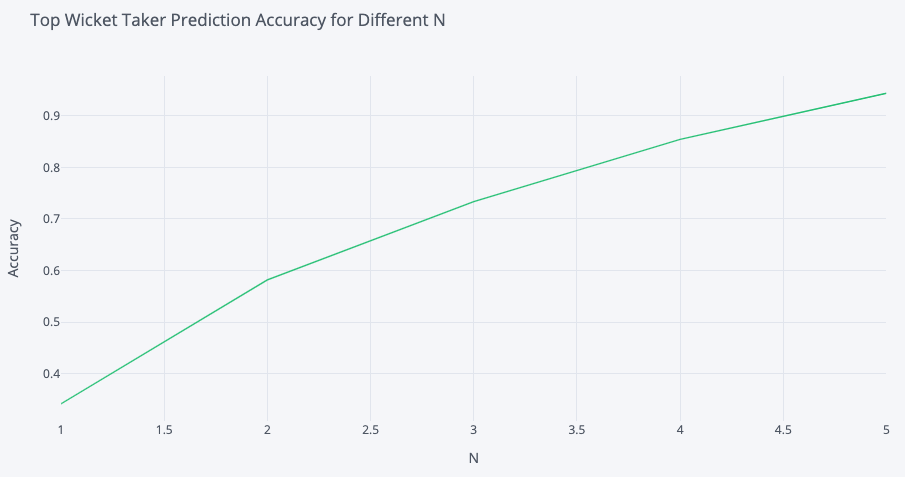 From the outset, the aim of this project was not really world-class prediction accuracy but rather to see if I could model whole T20 matches with ball-by-ball granularity, which I did. The model is very good at generating realistic simulations of T20 matches but unfortunately, it struggles to predict outcomes with much confidence. My intuition told me that this could be due to the sport just being difficult to predict in general and this was supported by my analysis of betting odds. I found that not only were the bookmaker's odds worse predictors than my model, they were even worse than a model with no information at all.

While this was a fun experiment, I discovered that there were some limitations to using it in practice. Firstly it takes a long time to run the simulations (approximately 10k simulations per hour on my machine). This wouldn't necessarily be a problem except for the fact that team lists are often not announced until 10-15 minutes before the game starts. Since one of the key advantages to the bottom-up style of modelling is the fact that it can better capture head to head matchups, simulating games with incorrect lineups is unlikely to yield good results.